Why Are We Here?

Continued from yesterday. Spence described the events that led to launching our expedition in just a few short weeks when a suitable vessel unexpectedly became available just before Christmas….

I found a valuable communications link directly with the survey company on the vessel, Williamson and Associates. We freely communicated about the follow on survey that we planned, types of services and capabilities of the vessel. The team on board had worked on a shipwreck survey for a customer for over 8 months. They had not found their objective, and the survey would end in January. The vessel would be available to us on condition that the hire would continue without interruption. A portion of the demobilization and redelivery of the ship to Singapore needed to be apportioned to us. Those conditions were agreeable because the charter rate of the vessel was incredibly good.

I remember it was a sunny day in Florida when Dave called again. A sponsor had stepped up. His name was Alan Eustace. I knew this man from following Dave’s participation in the StratEx stratospheric jump. This was truly a good day. We could move to finish the deal on the ship and get a team ready. Tom Dettweiler discovered that the Williamson survey gear could not provide the photography needs of our mission. We needed to find another provider fast. Two weeks’ time was not enough. Dave and Alan understood the technical and practical sides of putting together a complex project. Dave sought AUV services from Woods Hole Oceanographic Institution. He had solid connections and a good reputation there. In days, Dave, Alan, Jeff and Tom met at Woods Hole to evaluate the REMUS 6000 system. It would take just 6 weeks from the time of that meeting to have REMUS mobilized on deck. Activity started immediately at Woods Hole without a contract. The vessel owners were encouraged by the news of our new sponsor. They responded with a standby hire rate, in which we could hold the ship for 30 days while our new ocean services contractor could ship and mobilize their system onboard. Dave signed the charter agreement with MMA on January 23rd. We had a ship!

In the following weeks, REMUS was prepared and shipped from WHOI. The export license application (ITAR) was started which normally takes about 30 days to complete. We anticipated that REMUS would arrive in Hawaii about the same time as the ITAR. It didn’t. We all endured some anxious days when everything was in Hawaii ready to mobilize except the ITAR. Dave and Alan conferred again decided to proceed with mobilization without the ITAR. Dave does not toss the word “probably” around lightly. It’s a mathematical expression to be respected. It was the right choice.

The mission plan from 2006 was pulled out of a storage box. It was perfectly suited to use again. AE III was just an extension of AE II which met an untimely end. With this general road map, all the mission capabilities were delegated to the participants. The team was completely free to conceive, design, build, install and operate the systems that they will go to sea with. How well did they do? We’ll find out together soon, but I am confident that this will be our most successful mission ever.

Now, you may ask, “so how did Dave Jourdan know there was a ship out there?” The answer is one that you all should have been able to guess, “Elgen!” 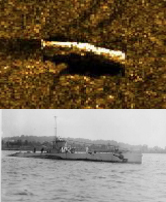 Yesterday’s successful test of the REMUS 6000 AUV concluded the mobilization phase of the project and allowed us to point our bow to the south west and begin the long transit to the vicinity of Howland Island, almost down to the Equator. At a steady 9 knots, it will take us a little more than a week to get there.

The REMUS test began just 5 nm offshore of Honolulu with the deployment of two transponders which act as acoustic beacons for the AUV. Sort of an underwater GPS, the transponders allow the vehicle navigation system to calculate ranges to fixed points to improve navigation accuracy. The beacons are tethered to weights on one end and a buoy on the other, so that they hang about 100 m above the seafloor. When they are no longer needed, an acoustic trigger releases them from the weight allowing them to bob to the surface and be recovered for re-use. Next, the REMUS was deployed, dove to the bottom, and began a series of maneuvers designed to test all sensors and systems. The target of the exercise was the sunken submarine USS S-19, a 219-foot WWI vintage Holland-class boat which served from 1921 to 1934. After decommissioning, it was scuttled off Honolulu in 1938 to satisfy terms of the London Naval Treaty.

The test was a great success. REMUS was recovered, the transponders were released and gathered aboard, and after a short delay to rig radio antennas the R/V Mermaid Vigilance headed towards our search area.

This morning being Sunday, after a busy five days of mobilization, Spence organized a relaxing bar-b-cue on the “sea porch.” Our attempt to give the crew a break and do the prep and cooking ourselves failed miserably — in fact, I think we inadvertently made more work for the crew! After a feast of burgers, hot dogs, shrimp, and skewers of chicken, steak, beef, and lamb we all gathered for a group photo with the Explorer’s Club flag.

How Did We Get Here?

My phone rang on December 11th. It was Dave Jourdan, asking if I would look into the availability of a ship that was mobilized with sonar working in the area of Hawaii. A dozen phone calls and emails later, I established that a ship was available for hire in January. This would be challenging, but not so different than what is often done at Nauticos. A core team spun up to full speed. Dave embarked on mission funding, Jeff Morris looked back at survey plans and data, and I took a role to organize a team and reach an agreement with the ship owners. Because there was a ship in the neighborhood with sonar, we started the Amelia Earhart III mission.

On December 23rd, I contacted a short list of prospective participants of this new mission to gauge whether they were available on a short notice for a commitment of undetermined duration to a remote location for a search for Amelia Earhart’s Electra. I gave them some time to think about it over the Christmas holiday. On December 27th, I asked for their answer. It was almost a unanimous YES! The clock was ticking. Less than 3 weeks to get ready. We needed a ship, an ocean services contractor, a plan and a sponsor.

Some resources arrived. I welcomed Louise Mnich to the team who would work with me on contracting the vessel and she worked with Tom Dettweiler on contracting for the ocean services. Also joining early was Jenne James in Maine. Jenne became the glue that binds us all together. She collected and organized information we needed from the team. Nothing falls off the table with Jenne. She kept things moving. Also on the team was Charlotte Vick, a person rich with contacts of helpful people around the Pacific rim. Charlotte has an eye for things that no one else would see. She was invaluable. This was an awesome team. Things really started to roll.

Louise and I worked for weeks by phone and email with the vessel’s broker in London on all matters needed to hire the vessel. During our negotiations, Nauticos did not have the means to close the deal. Sponsorship was not established. Both sides knew this. We all did our bidding on good faith . To appreciate the difficulty of conducting business like this, Louise in Washington, (GMT-8), myself in Florida (GMT-5), the ship’s broker in London (GMT-0), the ship owners in Singapore (GMT+8) all discussing the hire of a ship in Hawaii (GMT-10). There was not a single working hour of the day that all of us could communicate directly. Every issue took 2 or 3 days to ask and answer. Someone was working strange hours. I often would be up at 5AM to meet with the London broker at 10AM, and Louise was always there even though it was 2AM. While we struggled with this inconvenient circumstance, time was becoming a problem. We were just two weeks from departure.

… to be continued tomorrow. 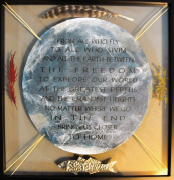 This morning at 0751 R/V Mermaid Vigilance cast off lines and put to sea beginning the 2017 Eustace Earhart Discovery Expedition. Our nine minute early departure was a good omen, everyone agrees. The final day of mobilization was busy with last minute shopping, cleaning spaces, and securing for sea occupying most of the day. Doc Pam arrived in the afternoon completing the team, and Louise also showed up to see us off.

By evening, with all preparations made and all hands present, we gathered for a group sunset photo with Mermaid in the background, then repaired to Uncle’s Restaurant for a farewell dinner. Local friends joined us, as well as Captain Noe and other members of the Vigilance crew. The team presented Alan with a unique & beautiful artistic creation depicting the earth surrounded by elements of sea & space, courtesy of Jenne James. We also gave a gift for his wife Kathy, and Elgen gave him a nautical pen in a case made of ancient wood. Alan had some kind and heartfelt words of inspiration, and we ended the evening in quite good humor. Then it was returning rental cars and to bed for the long day ahead.

Once at sea, we immediately prepared for an operational test of the AUV. Remus was deployed and spent a successful couple of hours exercising sonars, lights, cameras, navigation, tracking, and all other functions. An opportunity for the ship’s crew to maneuver into recovery position provided some excitement, including learning the difference between “stop engines” and “stop the ship.” Greg, Jeff, and Tom were all pleased with the results, so we turned southwest to begin a week-long transit to our area of operations near Howland Island.

Today our team will depart Honolulu for the vicinity of Howland Island, 1,600 miles to the southwest, to complete the deep sea search for Amelia Earhart’s lost Lockheed Electra. Adding to the work conducted during prior expeditions in 2002 and 2006, the team plans to complete a sonar survey of about 1,800 square miles of seafloor, an area believed to contain the aircraft. The expedition will use autonomous underwater technology to image the ocean floor nearly 18,000 feet below.

Besides conducting our own search operations, our expedition will be working with NOAA to support its upcoming exploration of the Pacific Remote Islands Marine National Monument as the research vessel Okeanos Explorer maps the deep seafloor near Howland Island in March. An education team on board our vessel will share the excitement of deep sea exploration and the fascination of robotic technology as we sail the central Pacific in our quest.